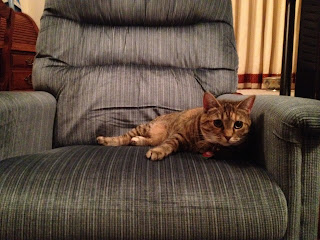 Before leaving for our new life in Maui, Hawaii, I stayed with my dogs and my mom at my mother-in-law's house for about a week.  In the last week I finalized many things with such a big move happening.  I enjoyed spending my last days among family.

My mother-in-law has a cat, Wilma.  Although she had met our dogs briefly before, she had never spent such a long time with them.  This visit she was unable to just hide for the day.  My mother-in-law swore I would never be able to get the cat and dog together.  I love a challenge!!!

Nekita was raised as a puppy with cats and learned from an early age that you just don't mess with the cat.  They have claws, you leave them alone.  Nekita has since left every cat alone, given them their space, and always been very respectful of them.

Caravaggio, on the other hand, was raised as a puppy with an older cat, Brandy, that was fully declawed.  Brandy would paw Caravaggio in the face rapidly and repeatedly and he thought it was like some sort of face massage.  Although Caravaggio is okay around cats, he has the compelling urge to chase them.  He did apparently corner a stray in our fenced yard once.  My husband said he just ran back and forth, not knowing what to do next.  Caravaggio may like to chase cats, but he does not want to hurt or kill them...he wants to play with them.

So I accepted my mother-in-law's challenge to get her cat, Wilma, and Caravaggio to be friends.

This took me only a few days... 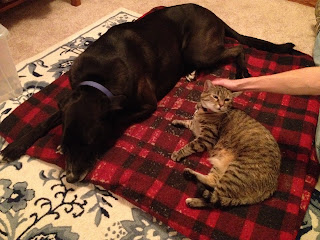 When we started the..."let's be friends," process, Wilma wasn't so excited about the idea.  The following pictures show the progress of Wilma's comfort level.  Training the cat to be comfortable with the dog was really just showing the cat that I controlled the dog, and that I would not allow the dog to harm her in any way. 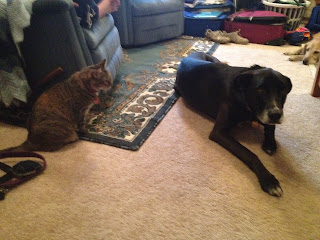 If you look at Caravaggio's body position in this picture, you can see he is submitting to relaxing near the cat.  This lets the cat know that he means her no harm. 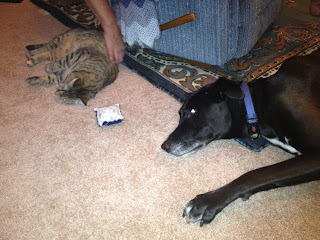 As Wilma gets a little more comfortable and playful with her catnip,
Caravaggio can get a little closer. 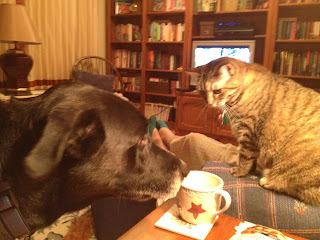 Wilma made amazingly fast progress in her comfortability with that big pony/ dog. 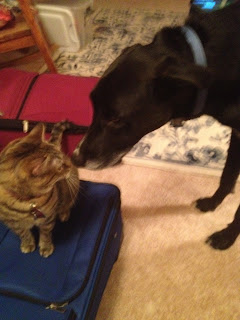 Wilma got so comfortable she was able to get nose to nose. 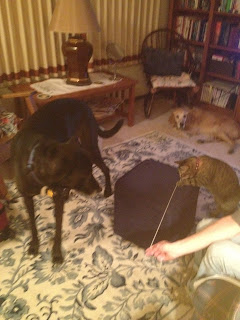 Wilma was able to play next to the dogs.
This is a HUGE step for a cat who was formerly terrified of dogs! 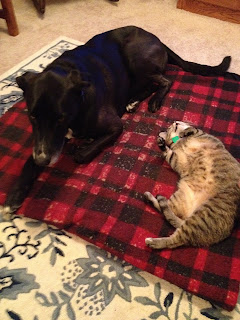 Posted by SuchGoodDogs at 3:46 PM No comments:

Remember...when using treats in positive reinforcement training, they should be soft and stinky.  You want treats that are soft so that they are easily broken up into small pieces.  We can sometimes use a lot of treats during a short, one-hour training session, and we want to keep our pets healthy, so keep the pieces small.  Secondly, make sure you are using treats that are stinky.  Dogs like strong smelling, stinky treats.  The worse it smells to you, probably the better it smells to your dog.  You want a treat that the dog really likes and will work hard to get.

Remember...training treats should always be soft and stinky! 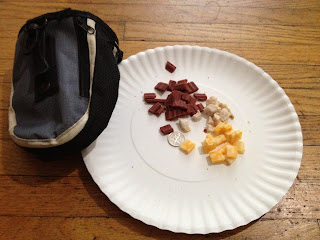 Here is an example of a good variety:
regular bacon dog treats, cheese, and turkey.
What works for your dog will depend on your dog's tastes.
Start with the low value (dog treat), and work your way up.
Always have a good variety of treats ready to try for your training session.

Treats should be cut into very small pieces. 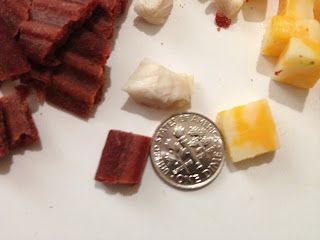 Training treats should be smaller than the size of a dime.

Posted by SuchGoodDogs at 11:31 AM No comments:


So we decided to visit the Minneapolis Institute of Arts before leaving our state of Minnesota.  While looking through the art, we came across this sculpture.  My husband reminded me that dogs have been featured in art throughout history.  This is just one example. 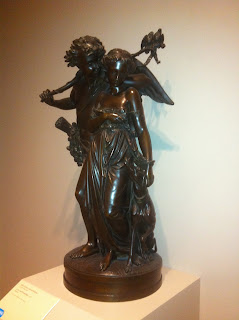 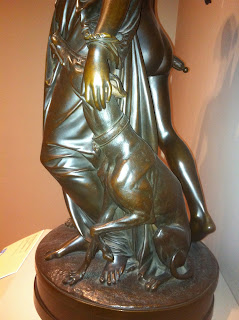 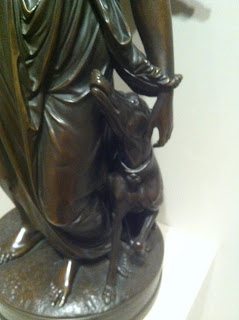 The dog looking lovingly at the woman in the sculpture.

Posted by SuchGoodDogs at 12:10 PM No comments: 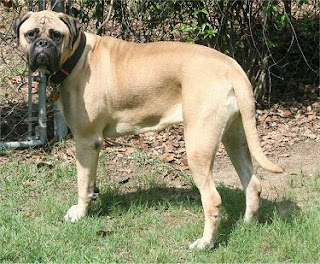 Created by crossing Bulldogs and English Mastiffs, the Bullmastiff was designed to be more agile and a quiet tracker, originally called "Gamekeeper's Night Dogs."  Poaching carried the penalty of death in England and Bullmastiffs were used to quietly bring them down.

The Bullmastiff of today is more mellow but still widely used for his amazing guarding abilities.  He is protective, but not aggressive.  The Bullmastiff is devoted to his family and alert, but is essentially a calm breed.  The Bullmastiff needs strong leadership and is not a breed recommended for first time dog owners.

Exercise:
Although the Bullmastiff is a very large dog, he does not require an enormous amount of exercise, and can sometimes be a bit lazy.  Regular twice daily walks will keep the Bullmastiff happy and healthy.

Grooming:
The coat of the Bullmastiff is easy to care for and needs only be brushed a few times a week.  Take extra special attention to keep the wrinkles of the face clean and free from infection.

Training:
The Bullmastiff grows large quite quickly and must be trained on basic manners from puppyhood.  Independent minded, the Bullmastiff needs consistent positive reinforcement training.  Socialization from puppyhood is also vital for the breed. 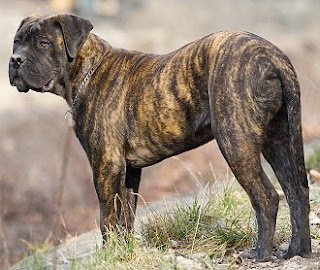 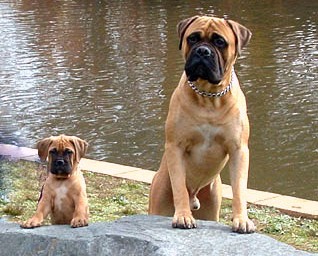 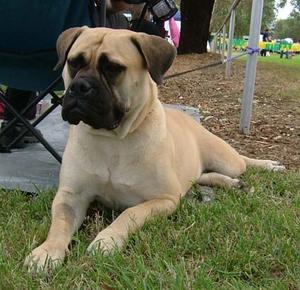 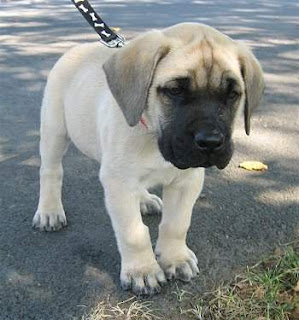 Posted by SuchGoodDogs at 7:06 PM No comments: